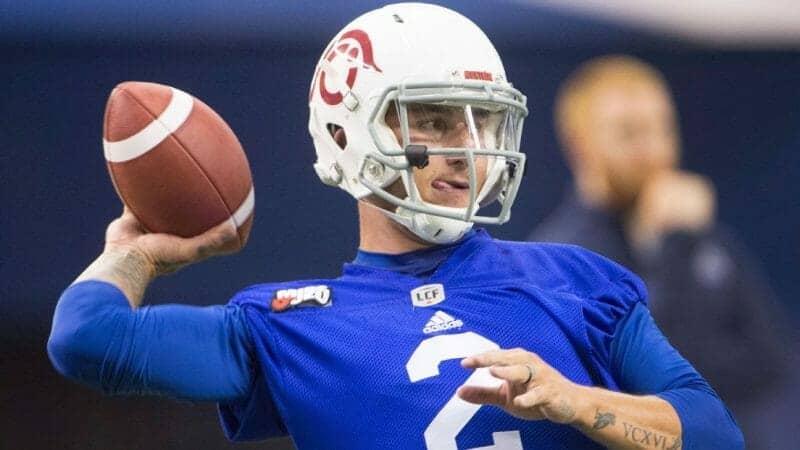 After a 2-0 start to the CFL betting season, we came back to earth last week with an 0-3 showing that was partly bad handicapping and partly bad luck.

Our wager on the Roughriders Team Total Under 20 in Hamilton was a bad read as we may have over-rated the Tiger-Cats, especially their defence. The other two losses last week were more of the bad luck variety as the RedBlacks beat B.C. but came 3 point short of covering the 7-point line and the Argos scored two defensive touchdowns to push their game versus Winnipeg Over the low total.

This week, we’re hoping to get back on track one bet at a time, beginning with the Thursday night clash between the Eskimos and Alouettes in Montreal. If we end up adding any more bets on the Week 7 CFL betting picks board, we’ll post them to our site later this week.

Normally, we’d look to back the team coming off its bye week, especially against an opponent that has had a short week of preparation (Montreal played on Saturday.) But the Eskimos haven’t exactly been a juggernaut following their bye week under Jason Maas (going 0-4 against the spread their last four in this situation), while Montreal should bring a lot of energy to the field tonight.

That’s because of the trade for Johnny Manziel, which rocked the CFL earlier this week. The former Heisman Trophy winner isn’t expected to play more than half the game, and there’s no guarantees about how well Manziel will play in whatever action he gets, but this Als team should get a spark from the front office at least trying to make them better. Often times, the biggest challenge for a struggling franchise is to bring enthusiasm and intensity to the field, and this is one of those rare occasions where we think the mediocre Alouettes (3-13 ATS last 16) to do just that.

Edmonton may be 3-2, but they’re struggling to put inferior opponents away, with just one of their three wins this season coming by more than a field goal. That includes a 16-15 victory two weeks ago at home over a weak Argos team that badly misses Ricky Ray. That result dropped the Eskies to 1-4 ATS in their last 5 against sub-.500 opponents, and we expect that trend to continue this week.

We’re grabbing the 10 points with the Alouettes that were available at several betting sites on Thursday morning, including BetOnline. Montreal +10 -112 is our official play here, although the Alouettes First Half +5 -108 (Pinnacle) is also a solid play if you can’t find Montreal +10 at your book.