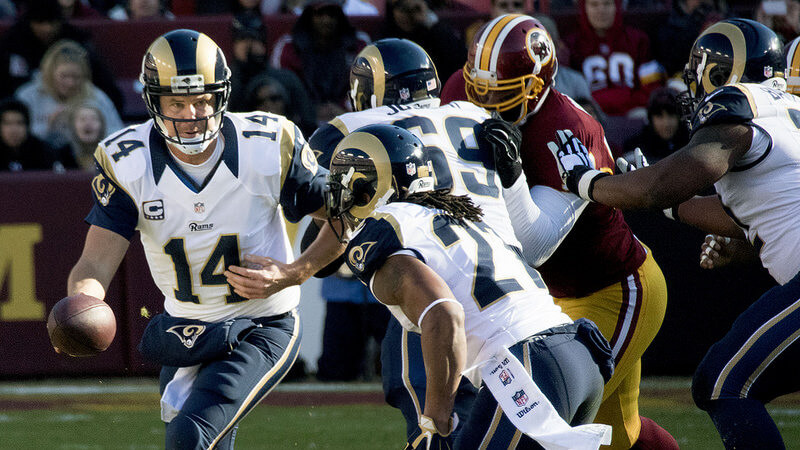 With three weeks to go in the NFL betting season, there are a lot of teams still alive in both conference playoff pictures.

In the AFC, the Steelers, Ravens and Chargers are in a three-way tie for the two wild card spots, with the Dolphins, Bills, Browns, Texans and Chiefs one win behind.

The NFC also has a three-way tie for the two wild card spots, with the Cowboys, Lions and Seahawks deadlocked with 9-4 records. And don’t forget about the pathetic NFC South, where the Falcons and Saints are tied for first with 5-8 marks and the Panthers are in pursuit at 4-8-1.

These “must-win” spots can make for some great NFL betting opportunities. NFL point spreads will be inflated for teams that can’t afford to lose. Just don’t forget that if these teams were so good that they could just flip a switch and win when they need to, they wouldn’t be in this position to begin with.

Weird to see the 6-7 Rams favoured at home to the 10-3 Cardinals, no? This line actually opened with St. Louis as a 3-point favourite, but the early money came in on the Rams to move the point spread off the key number of 3.

The Rams blanked Washington last week to become the first team to post back-to-back shutouts in the same season since the 2009 Cowboys. St. Louis has already beat the 49ers and Seahawks this year, so what’s another NFC West rival?

No surprise to see Arizona getting no respect once again on the NFL betting lines. The Cardinals were actually underdogs last week at home to the Chiefs but rallied for another impressive win.

Cleveland’s playoff hopes are almost dead, following tough losses to the Bills and Colts the past two weeks. But early money expects the Browns to play Cincy tough, moving the NFL betting lines down from an opener of Cleveland +2. Hmmm, wonder why? Oh yeah, Johnny Manziel must be starting at QB for Cleveland!

Just when you think you have the Bengals figured out, they go and lay an egg like they did last week at home to the Steelers (though we saw that one coming). Cincinnati still leads the AFC North, but they need a win in this one, considering they face the Broncos and Steelers in their last two games.

If Browns can’t make the playoffs, you know they’d love to spoil the postseason chances of their state rivals. Cleveland whipped Cincy 24-3 earlier this season.

Interesting that Kansas City is getting the early betting support, moving from 9.5 point favourites to 10.5 chalk on the NFL betting lines. Chiefs have lost three in a row, one of those coming to the Raiders a couple of weeks ago.

Oakland is red hot by its lowly standards, winning two of its past three. The Raiders seem to be playing with more confidence these days and love to play the hated Chiefs tough, going 7-1 ATS in their last eight visits to Arrowhead.

Kansas City will be feeling the heat in this one, especially QB Alex Smith. The Chiefs have been held to 20 points or less in four of their last five games.

What a difference two weeks makes. Seattle was a small underdog at San Francisco two weeks ago on Thursday Night Football, but now the Seahawks are whopping 10-point favourites in the rematch in Seattle. This game opened at Seattle -7.5 on the opening NFL betting lines, so there’s no mystery as to where the early money has gone.

The wheels seem to officially be off the underachieving 49ers. San Fran somehow lost by 11 to the Raiders last week to basically kill whatever playoff hopes they had left. The question is whether the 49ers will now mail in the rest of the year, or do they have anything left in the tank for their hated NFC West rivals?

Seattle has recovered from a midseason swoon to regain its Super Bowl winning form of last year. The Seahawks have outscored their last three opponents by a combined count of 62-20.