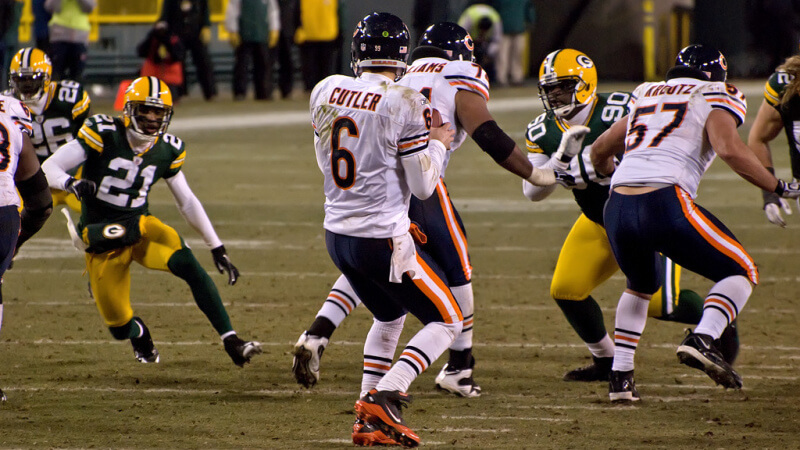 Jay Cutler and the Bears were one of the teams people were betting on after the Week 12 opening NFL betting lines were released. (Photo credit: Mike Morbeck / Foter / CC BY-SA)

Many of these NFL betting lines will look drastically different by the weekend, but knowing the opening lines is helpful in determining where the early money is going. Sportsbooks will change their NFL betting lines if people they respect start betting heavily on certain sides.

For example, if the Packers open at -7 and move quickly to -10, that’s a pretty good indicator that there is some serious money coming in on Green Bay.

Here’s a look at the opening NFL betting lines for Week 12.

Kansas City is coming off a 24-20 home win over defending Super Bowl champion Seattle. Oakland lost its 16th in a row, 13-6 in San Diego. Chiefs were quickly bet up to 7-point favourites in matchup of AFC West rivals.

Tampa was impressive in a 27-7 win at Washington last week. Bears snapped out of an ugly funk with a 21-13 home victory over the Vikings, with Jay Cutler throwing for 300+ yards and three TDs. Early money bet Chicago up to 6-point chalk.

Jets had a bye last week after dominating the Steelers in their previous game. Buffalo’s playoff hopes basically died with a 22-9 loss in Miami on Thursday night. Bills were bet up to 4.5-point faves shortly after the line opened.

Tennessee is on a short week after hosting the Steelers on Monday Night. Philly was humiliated on the Fox Game of the Week, falling 53-20 in Green Bay.

Cleveland coming off a disappointing 23-7 loss at home to Houston, when the Browns allowed 211 rushing yards. Atlanta rallied late to earn a 19-17 win in Carolina and, as pathetic as it is, tie for first in the NFC South with a 4-6 record.

Green Bay posted 50 points for the second straight week, blowing out the Eagles 53-20 at home. Vikings had just 10 first downs in a 21-13 loss at Chicago. Packers steamed up to 9-point favourites and the total quickly rose to 48.5.

Cincy turned around its recent slide with an impressive 27-10 victory in New Orleans. Houston got back to .500 with a 23-7 victory in Cleveland. Texans were bet up to 2.5-point favourites shortly after the open.

Jacksonville enjoyed a bye week and is coming off a loss to Dallas in England. Colts lost to New England 42-20 at home in a big AFC showdown matchup, but pounded the Jags 44-17 in Week 3. Looked at first ike a potential letdown spot for Indy, but you have to think Colts will be motivated to get back on track

St. Louis posted yet another huge upset victory, holding Peyton Manning and company to one touchdown in a 22-7 win over the Broncos. Chargers scored in the opening minute of their game against Oakland, then held on for a 13-6 win over the Raiders.

Arizona was a short home dog for its first game without Carson Palmer, but defence led the way in a 14-6 win over the Lions. Seattle fell to 6-4 and third in the NFC West with 24-20 loss in Kansas City. The Seahawks was one of the fastest of the opening NFL betting lines to move, going to -6.5 within minutes of the line being posted.

Miami will have had plenty of preparation time for this one, not having played since a Thursday Night win over Buffalo. Denver was shocked 22-7 in St. Louis and lost Emanuel Sanders, Julius Thomas and Monte Ball to injuries. Obvious bounceback spot for the Broncos, but do they have the pieces on offence to do it?

Dallas had a bye week and hopes Tony Romo will be even healthier than he was for their last game, a 31-17 win over Jacksonville in England. Giants’ offence continued to struggle in 16-10 home loss to 49ers, with turnovers snuffing out several promising drives. We fully expect to see this line move over a field goal by midweek.

Baltimore enjoyed week off after 21-7 win over Titans in Week 10. New Orleans did the unthinkable — losing a second straight at home — against Bengals, falling 27-10. Saints need this one badly, and the early money agreed, moving them to 4-point favourites almost immediately.