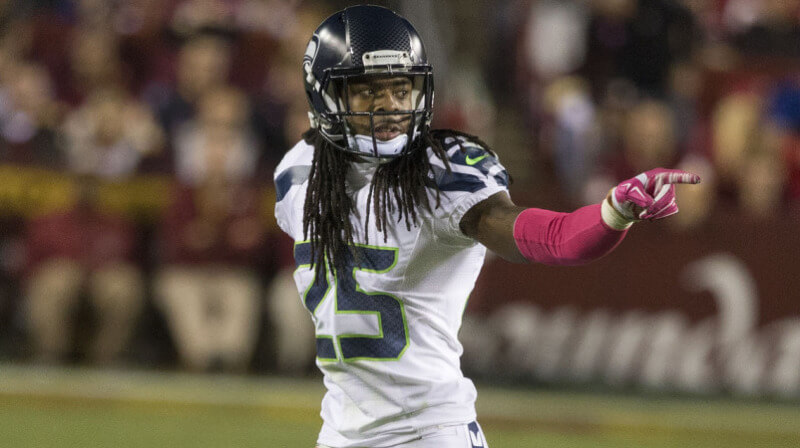 Will Richard Sherman and the Seahawks be able to slow down Tom Brady and the Patriots' passing attack? (Photo credit: Keith Allison / Foter / CC BY-SA)

This Super Bowl betting preview by Pinnacle Sports investigates various predictive indicators to give bettors an insight into betting the spread and moneyline markets.

Not a member of Pinnacle Sports or any of our other recommended sportsbooks? Check out our Start Betting in Minutes page and make sure you’re signed up in time for kickoff!

For the second season running, each conference is represented by their top seed. Recent events always have a greater impact and the dominance of the highest seeds might be taken as a sign that quality is invariably rewarded in the NFL.

However, since the turn of the century, the Super Bowl winners have been spread relatively equally amongst the six seeding positions and even with guaranteed home field advantage and one fewer game to be negotiated, the top seeds have often failed to outshine the others.

So luck, as well as talent, can often combine to decide the outcome of a single gridiron game — something you should always consider in NFL betting.

Do the New England Patriots offer value on the spread?

The Bill Belichick — coach of the Patriots — era began in New England in 2000, during which the Patriots have gone 194-73 for a 73% winning percentage. Of more significance from a betting angle, they have covered the spread on 57% of times over the same period.

The spread has been beaten by an average of over a field goal per game and blindly following the Patriots has been profitable, especially where betting margins are small (read more about how Pinnacle Sports offers reduced juice). It’s important to realize that such a record against the spread is unlikely to have occurred solely through chance, given the 260 matches the data was collected in.

Tom Brady’s career as a starter began the following season and his 20-8 post-season record s is testament to the Patriots’ prolonged quality in an era of increased parity. However, their overall dominance against the quoted spread is not repeated in the much smaller, higher profile games in the post season.

Their initial Super Bowl winning season of 2001 featured two games where the Patriots were double-digit underdogs. But subsequently they have been favoured in 20 of the remaining post-season games with Brady under centre and despite a 71% straight up winning record, they have a sub 50% record against the spread.

They have won often in the post season, but not by margins that are over and above the expectations of the market, meaning the spread is usually correct or if anything overestimates their ability.

The Patriots are often described as more than the sum of their parts and although they often record good but not great efficiency statistics, these averages often omit the ability to prolong drives by earning a new set of downs. It isn’t uncommon for the Patriots to get just enough first down yardage, but no more. This may depress their efficiency stats, but ensure that they continue and finish off drives by scoring points.

Belichick has occasional brushes with authority. The team was disciplined in 2007 for video-taping the defensive signals of divisional rivals, the New York Jets, and his reluctance to give information to the media hints at his desire to obtain as much advantage as possible from every situation. The Patriots were again under the microscope after the AFC Championship Game for using under-inflated footballs against the Colts.

The NFC Champions, the Seattle Seahawks, were a very good side last season, which became even better by winning the turnover contest. That talent rarely persists, especially at the heights seen in the 2013 Super Bowl champions, and their regular-season turnover differential of 20 in 2013 fell to 10 this year.

Turnovers very nearly derailed Seattle’s attempt at a repeat of last year’s victory. They turned the ball over three more times than Green Bay in the NFC Championship Game, ceding both potential points and territory to a very good team and needed numerous, low probability plays to succeed to claim a win. A side that commits three or more turnovers more than their opponents wins just 10% of such games.

Therefore, a statistic weighted partly in skill, but mainly in luck that very nearly eliminated Seattle in Week 3 of the playoffs, shouldn’t detract from the Seahawk’s impressive, season-long efficiency statistics. These numbers remain among the best in the league, placing Seattle above average in passing and running on both sides of the ball.

Although the aftermath of the NFC Championship Game focused on the early struggles on offense, particular under centre, the defense, through necessity, played extremely well. They confined Green Bay to field goals, rather than touchdowns, despite little rest and facing continually poor field position.It is understandable that the most recent results have the most influence on how a side is perceived, but New England was equally unimpressive when falling behind early in the Divisional round at home to Baltimore and early season, wide margin losses at Miami and Kansas City were also taken as a sign of impending failure.

So we have a mouth-watering clash between two equally matched top seeds. Seattle tops New England in efficiency statistics and play the showdown at a familiar venue, the home of their regular season NFC West rivals, the Arizona Cardinals.

And New England is brilliantly coached, excels at confusing opposing defences and young quarterbacks, while accumulating points in a methodical way, through a quarterback whose post season experience surpasses that of any past or present player. But because of their continued success, they are perhaps asked to overcome a playoff premium against the spread in high profile matches.

Anecdotally, the post season is played at a much higher intensity. And when skill and physical confrontation is part of a sport, it is easy to imagine a scenario where the physical aspect is kept in check in the prolonged regular season, but not in the elimination stage.

So we may not have seen quite how good these two teams are, especially physically, until Super Bowl Sunday.

Depending on bettors preferred choice of predictive statistic, a narrow case can be made for either side given their strengths are closely matched.