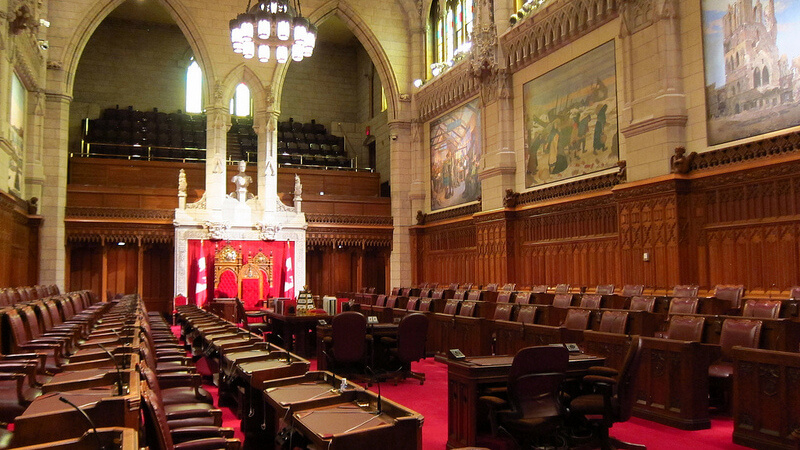 Here’s an excerpt from the speech to Senate by the 70-year-old Runciman, who is also known for fighting against the end of slots at racetracks and for his pro-horse racing stance in Ontario:

Make no mistake: If you vote against this bill, you are not voting to put a stop to single-event sports   gambling, but you are voting to ensure it remains in the shadows, with the money going offshore and to organized crime.

No one knows for sure how much money is bet on single sporting events by Canadians, but we know it is in the billions, perhaps the tens of billions of dollars. Voting against this bill will not change it one bit. The testimony from experts at committee was clear: Single-event sports betting is readily available and widely practised by Canadians.

Plenty of opposition in Senate

Runciman seems to have changed his stance — or at least his level of passion — since telling the Canadian Press and the Globe the previous month that the bill was headed for defeat in the Senate. This excerpt from MacLeans:

“There’s certainly a real effort to defeat the bill,” said Conservative Senator Bob Runciman, who is sponsoring the legislation in the Senate but describes himself as an “unenthusiastic” supporter. “A number of senators in the Conservative caucus are adamantly opposed to the bill.”

The former Ontario cabinet minister said there are several reasons why senators oppose the bill – including personal feelings about gambling and concern about the lack of debate the bill received in the House. But Mr. Runciman suggested there are other factors motivating the resistance. “Some people see this as an opportunity to send a message that we’re alive and well,” he said. “It’s going to be an interesting period of time dealing with this bill.”

We’re hearing mixed reports on the likelihood of Bill C-290 being passed, and we might not know for sure for a while.

In the meantime, all we can do is speculate on how government-regulated single game sports betting would benefit us Canadian gamblers — if it would at all.

First of all, just because the bill is passed allowing governments to regulate single game sports betting doesn’t mean it would be immediately offered to the masses. There’s the possibility that single game sports betting would be limited to government-operated casinos around the country, while anyone not living near a casino would still be stuck with Proline multi-game wagering.

Secondly, we’ll be shocked if the provincial governments didn’t install a juice structure that stacks the odds against bettors even more. Even a structure of -120 on single-game wagers (meaning bettors have to lay 12 to win 10) would require bettors to win 54.5 per cent of their wagers — a percentage that could be quite profitable at -110 odds — just to break even.

Several offshore sportsbooks, meanwhile, offer odds of better than -110. Pinnacle Sports continues to offer the best odds in the business, generally charging in the -104 to -105 range, which allows bettors to profit while winning just 52.5 per cent of their wagers.

Other potential disadvantages to using the government’s sportsbooks would be lower limits (the amount you can bet on a game), less variety of games offered (particularly NCAA basketball and football) and less betting options (live betting during games, half-time wagering, prop betting, teasers, etc.).

You can also forget about getting lucrative deposit and reload bonuses offered by offshore sportsbooks like Bet365, SportsInteraction and Bodog.

One plus about government-regulated single-game sports betting is that warm and fuzzy feeling of knowing your money is in safe hands. But there are several very reputable and secure offshore sportsbooks you can use as well, sportsbooks that are regulated by governments of other countries.

There is a reason William Hill has been in operation in Great Britain for nearly a century — they aren’t in the habit of ripping people off, which seems to be the biggest phobia most people have about Internet sports betting.