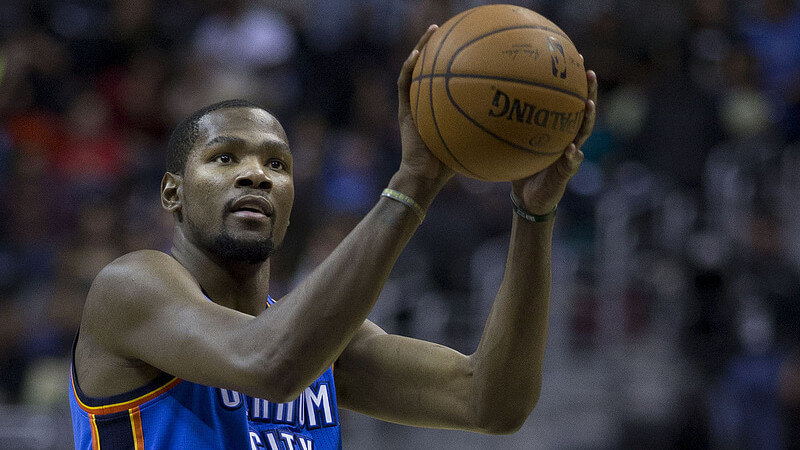 Kevin Durant has been in and out of the Oklahoma City lineup this year, but the Thunder is still ranked third on the 2015 NBA championship odds. (Photo credit: Keith Allison / Foter / CC BY-SA)

According to the 2015 NBA championship odds, the Oklahoma City Thunder was the biggest winner at the NBA trade deadline.

OKC was listed at 8:1 to win the NBA title at Bodog before the deadline, but its acquisitions of Enes Kanter, D.J. Augustin, Kyle Singler and Steve Novak vaulted the Thunder to 5:1 this week.

That’s a lot of respect for a team that is fighting to even make the playoffs in the tough West Conference. Early-season injuries to Kevin Durant and Russell Westbrook put Oklahoma City behind the 8-ball, but the Thunder is currently 8th in the West and on the heels of the Spurs for 7th.

The Raptors stood pat at the deadline, but still improved from 33:1 to 25:1 at Bodog. Those odds likely improved from Toronto’s impressive four-game winning streak recently, when the Raps beat the Clippers, Spurs, Wizards and Hawks in consecutive outings.

The Warriors and Cavaliers remain the top two favourites on the 2015 NBA championship odds.

Bodog 2015 NBA Championship Odds Before And After Trade Deadline