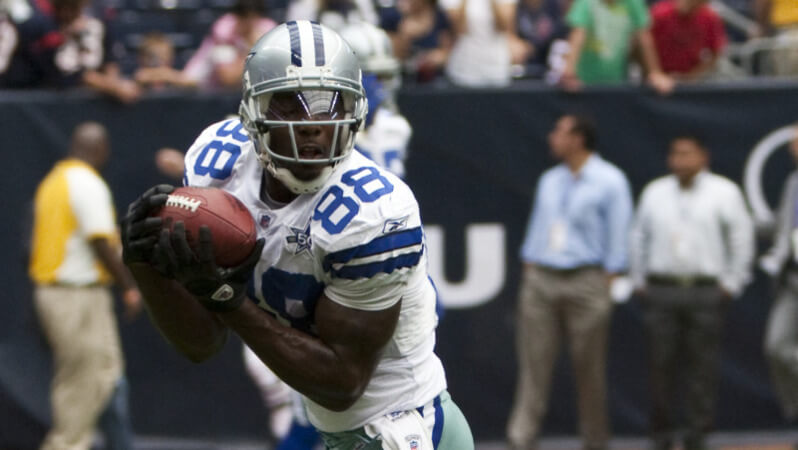 Dez Bryant and the Cowboys have had issues playing in cold weather in recent seasons. (Photo credit: AJ Guel Photography / Foter / CC BY)

With the success of the Cowboys this season and the ineptitude of the Bears, it’s easy to forget that Chicago whipped Dallas 45-28 last December at Soldier Field.

The temperature for that game was 8 degrees fahrenheit at kickoff, before the Bears scored on their first eight possessions.

This year’s meeting on Thursday Night Football might be balmy by comparison (likely 30 degrees or so), but could the Cowboys be in for some more struggles in cold Chicago? Dallas already has a reputation as a team that struggles when the temperatures dip, going 29-44 in December since 1996.

Dallas Morning News’ David Moore addressed the question in a column this week:

“Yeah, we don’t talk about it,” (Cowboys QB Tony) Romo said. “Each season is a new football team. You’re going to write your own story each year with that football team.

Owner Jerry Jones believes this team is better equipped to handle December than recent versions. (TE Jason) Witten clings to the idea that the players have learned from past failures and will succeed this time around.

“Well, I really can’t answer that right now,” (WR Dez) Bryant said. “But I can say the feeling is a lot different.

“This is the beginning for us, the beginning of December for us. So we’ll see. We’re excited about the work that we’ve put in and we can only go from there.”

Are the players tired of hearing about December? Sure. But they understand.

“Until you change it, they’re going to continue to happen,” Witten said of the doubts and questions. “That’s why I think we’re all anxious to change the outcome.”

Dallas might feel better equipped to handle the cold weather now that it is finally committed to a strong running game. DeMarco Murray leads the NFL with 288 rushing attempts this season and is averaging 118.9 rushing yards per game.

However, the Bears have been one of the strongest run defences this year, as Patrick Finley of the Chicago Sun Times pointed out in a recent story:

Only nine teams allow fewer rushing yards than the Bears’ 105.5 per game. They’ve allowed 1,266 through 12 games, less than half the total from all last season. The difference between the two seasons’ yards equates to roughly three quarters of a mile — the walk from Buckingham Fountain to the north side of Soldier Field.

The Lions’ Joique Bell set the high mark for a Bears opponent Thursday with 91 yards on 23 carries.

The 49ers’ leading rusher was their quarterback (Colin Kaepernick, nine carries for 64 yards), the Vikings an upback on a fake punt (Andrew Sendejo, one for 48) and the Packers, in Week 10, somebody named DuJuan Harris (eight for 52), who parlayed his garbage-time carries into exactly zero runs since.

In half their 12 games, the Bears have allowed their opponent’s leading rusher to gain fewer than 50 yards.

But (Murray) isn’t the Panthers’ Darrin Reaves or the Falcons’ Steven Jackson or the Patriots’ Jonas Gray.

The Bears know that.

“He gets a lot of touches,” (Chicago defensive co-ordinator Mel) Tucker said. “It seems like he gets better with every touch. He’s a relentless competitor.”

The Cowboys began Thursday as 3.5 point favourites at Pinnacle Sports, Bet365 and William Hill. If you like the Bears in this one, you could get +4 at Bodog and Sports Interaction. The over/under total was set at 51.