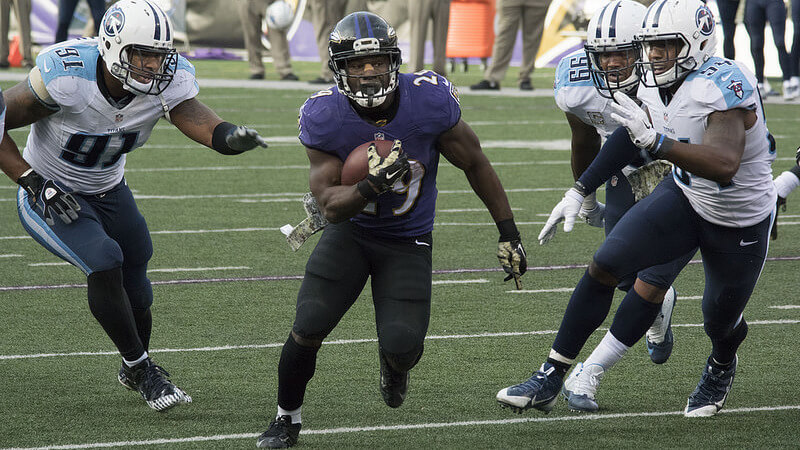 Baltimore's Justin Forsett could be in for a big rushing day against the Dolphins. (Photo credit: Keith Allison / Foter / CC BY-SA)

Instead of taking the points with an underdog, it can pay off to shoot for an extra return by taking them on the moneyline instead.

Here are three underdogs this week in the NFL that are worth a shot at plus money. (Lines as of Friday morning)

In a rivalry like this, the value is always with the underdog. Especially when it’s the Steelers, who had won 11 of 12 in Cincinnati before the Bengals won 20-10 last September.

It also helps that Pittsburgh’s in a bounceback spot, having laid an egg last week at home to the Saints. The Bengals return home after three straight road wins and might be feeling a little too good about themselves these days to bring the same focus as the desperate Steelers.

Bet the Steelers +145 at Sports Interaction

Baltimore will be ready for this one, having blown a fourth-quarter lead last week in a home loss to San Diego. Ravens RB Justin Forsett is averaging a league-high 5.6 yards per carry, and should do well against the Dolphins’ 21st-ranked run defence.

Miami is on a short week, coming off a Monday Night Football win at the Jets that was more difficult than it should have been. The Ravens have won their last three visits to Miami and five of their last six overall versus the Dolphins.

Bet the Ravens +127 at Pinnacle Sports

Okay, so Arizona is barely an underdog in this one, with the line as a pick ‘em in many sportsbooks and +1 at a few. But not being favoured should piss off a Cardinals team that is still tied for the best record in the NFL, despite losing its past two games.

People are jumping off the Arizona bandwagon — if they ever got on in the first place. It’s easy to point to the injury to Carson Palmer as the reason for the Cardinals’ recent woes, but they won their first game with Drew Stanton at QB.

Scheduling might be more to blame. Arizona lost to a desperate Seahawks team in Seattle — possibly the hardest place in the NFL for road teams to win — and then had an understandable letdown the following game in Atlanta last week. Losing to the Falcons makes everyone think the sky is falling in Arizona, and we’re not convinced that’s the case.

Bet the Cardinals +102 at Pinnacle Sports